Our research is strictly evidence-based

To understand the origin of the cosmos and its multitude of wonders, we need an objective way of gathering & analysing evidence. The 'scientific method' is a particularly powerful tool: observations are connected together by a hunch (or 'hypothesis'); the predictions are tested through repeated experiment by independent researchers; and the initial hypothesis is confirmed or refuted, generating further hunches to be investigated by similar means.

But some aspects of origins are not entirely accessible to the methods of science in practice. For example, if we are going to study the emergence of a particular ancient civilisation, we may have to rely heavily on written records. Of course, the fact that we cannot test something by experimental science does not mean that it did not happen. Nevertheless, we need good evidence to have any degree of certainty; and many ancient records amount to nothing more than story- telling, when judged by modern eyes at least.

These difficulties are acute when the assumptions of science do not hold, even in principle. For example, to have a complete understanding of the origin of the cosmos, we must be able to explain the origin of the laws that governed the initial conditions. Even the elusive 'Theory of Everything' assumes such laws, and so does not provide any ultimate explanation. 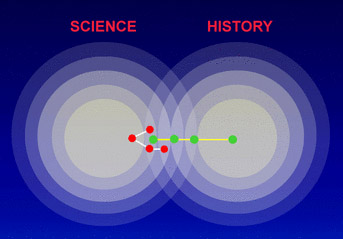 At Genesis, we have developed a research methodology that objectively combines data from diverse sources in the most simple & reasonable ('parsimonious') way. It assigns rough probabilities to data points where complete experimental values are lacking; and it operates to minimise biased selection of data across different fields ('cherry picking'). The method involves gathering data within each field independently at first; combining the data within each field into a model; weighting the elements of each model according to level of certainty; and only then combining the models to mutually test & cross illuminate each other. ^ Methodology Overview Research Methodology (part 2) >
PO Box 300
LONDON
SE11 5WP
PO Box 300
LONDON
SE11 5WP
Registered Charity 1081334
Registered Charity 1081334