In our research we expect the unexpected 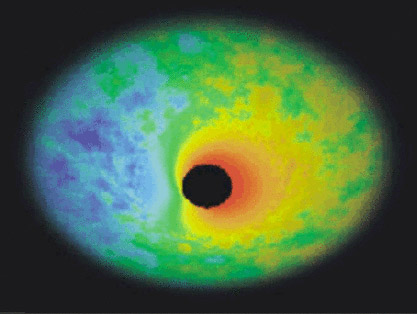 Simulated image of the accretion disk around a black hole: space & time distortions by the intense gravity shift emissions to longer & shorter wavelengths (NASA)
The universe can seem a strange place: our everyday lives are confined to one scale; so what happens at either end (the very big or small; the very fast or slow) often appears bizarre. For example, who would have expected time to stand still in a space craft on the edge of a black hole when observed from a great distance, but to run normally within the space craft itself? Or who might have guessed that what determines whether a radioactive atom decays is the observation of the radiation rather than the other way around? -If such events happen routinely within the universe today, far stranger things may have happened under the extreme conditions at the beginning.

Furthermore, important breakthroughs in science often lie in the grey area between current orthodoxy and current heresy. For example, the idea that an asteroidal impact could have been involved in the extinction of the dinosaurs, or that the development of life happened in a jerky manner, were both heresy just a few decades ago.

At Genesis therefore, we tread a fine line in our research by working so as to expect the unexpected, and by being willing to actively resist the priority of the paradigm should the evidence prove powerful enough.